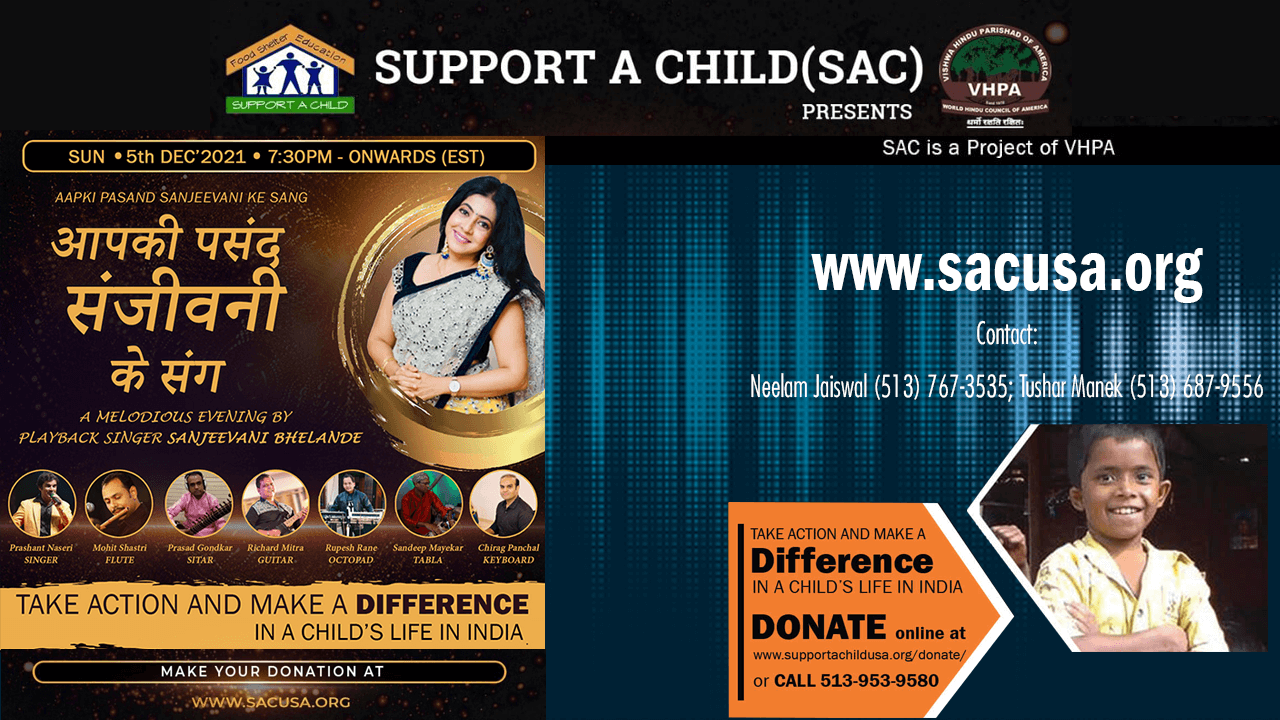 Enjoy Shows With Your Friends

May We Help You?

Next Show Begins In

SAC routinely hosts world class cultural programs in multiple US cities that serve as great fund raisers and help raise awareness about the various projects undertaken by VHPA. After three years of spectacularly successful stage shows and virtual shows of last year, this year as well SAC would be hosting free virtual concerts due to the pandemic and in-person concerts in select cities.

Programs will range from comedy shows, instrumentals, musicals, and to dance dramas.

You can watch the programs here and pledge your donations. In 2020 we supported 3500 children.

So please mark your calendars and join us on the show dates! 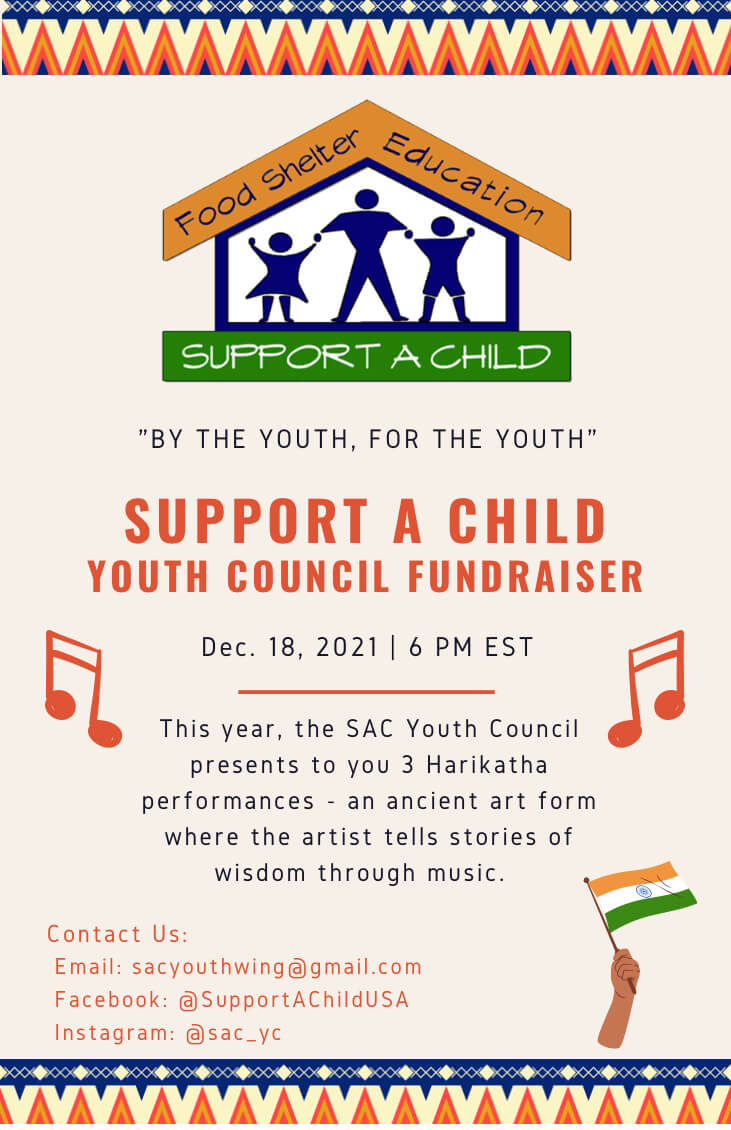 The fundraiser will showcase the talents of some exciting up-and-coming artists in Harikatha. Harikatha literally translates to “the story of Lord Vishnu”. It is a form of Hindu traditional discourse where the storyteller explores a traditional theme. Harikatha involves the narration of a story, intermingling songs relating to the story. It involves numerous sub plots and anecdotes. Harikatha as an art form can be traced back to the Ramayan days. Lav and Kush had sung the story of Ramayan in the Ashwamedha Maha Mandapam in the presence of Lord Ram Himself. The first Harikatha singer was Sage Narada.

Sumedha Mahesh, a Junior at Western Reserve Academy in Ohio, is a multi-talented artist, whose Harikathas have won multiple awards and garnered attention from television networks.

Karthik Subramanian, a seventh grader from New Jersey who has been learning Harikatha since the age of four, will also be performing. In addition to his Harikatha skills, he is proficient in both Western and Eastern styles of music.

Mohanakrishnan Narayanan, a fourth grader from Massachusetts, started his musical journey at the age of 4, when he began Bhagavat Parayanam. Krishna has quickly advanced, performing Harikatha on various topics like Bhakta Charitram and Thyagaraja Krithis. 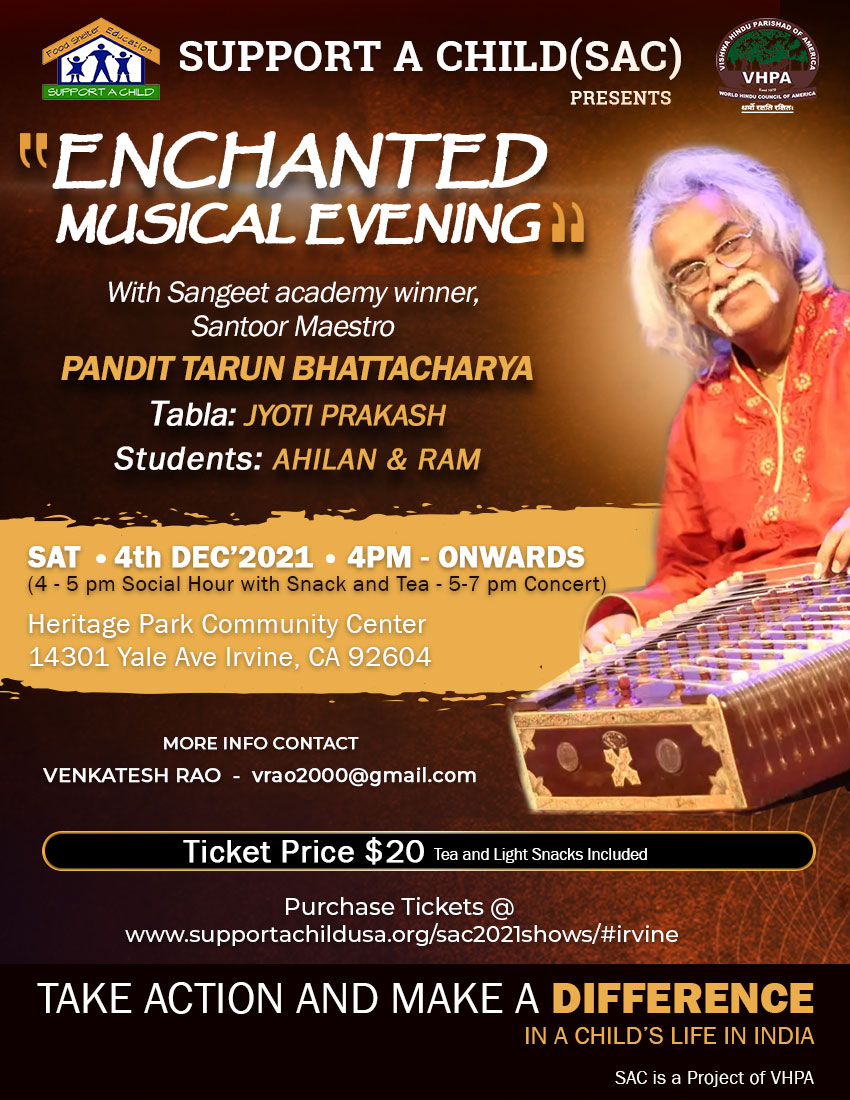 with multiple talents from Bharat 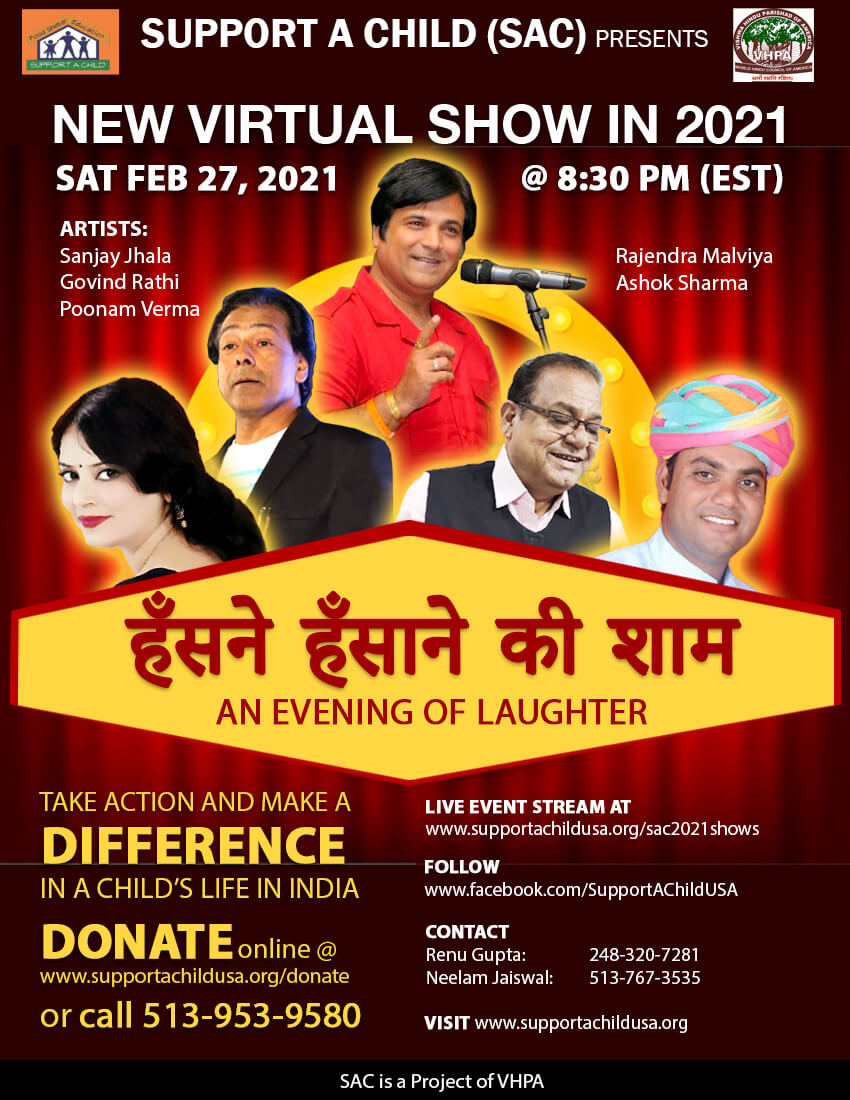 Support A Child (SAC) is bringing to you a very entertaining Kavi Sammelan with renowned Kavis (Poets) from Bharat. All these poets have done a number of popular TV shows and participated in Kavi Sammelan from last 15+ years.

Sanjay Jhala: Sanjay Jhala is one of the most popular names among the poet of comic and satire. He is one of the poets who give very-very meaningful message through his kavita (poem). He has done more than 2000+ stage show of his comic poetry across the world. Sanjay Jhala has done number of popular TV shows for different channels which gained extreme appreciation. He has also written books on satire and number of regular column in different prestigious newspaper.

Poonam Verma: Reciting kavita from last 15+ years in Bharat and several other countries including at Lal Kila Kavi Sammelan on Republic Day and also in several TV channels.

Ashok Sharma (Mimicry artist): Started to do mimcry at the age of 12 and have performed in several TV channels including Sony, DD1 and Zee. 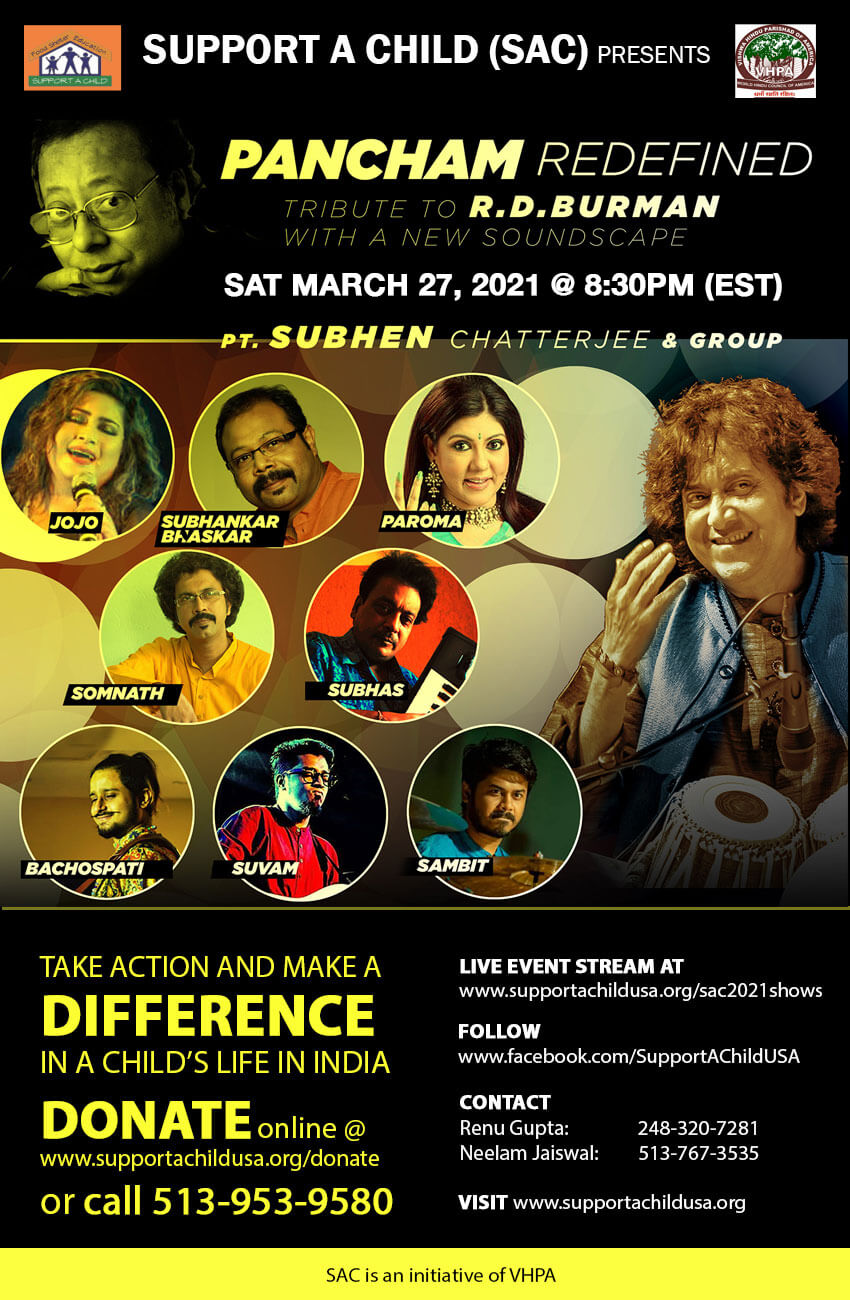 BANDISH FUSION is an experience of soul-stirring effect of sheer melodic beauty fused with incredible rhythms taking one to a whole new level of musical raptures. This band kicked off its journey way back in 1985 being one of the very first bands of its kind in India and is now surely regarded as one of the longest existing front ranking bands of the country.

In this show you will enjoy a fusion music with an unprecedented blending of genres combined with complex rhythms in unusual time signatures with a thoughtful blend of improvisational concept that was rooted in jazz as well as Indian music and harmonic influence from European classical music.

Enjoy the immortal compositions of the legendary R.D. Burman (Pancham). 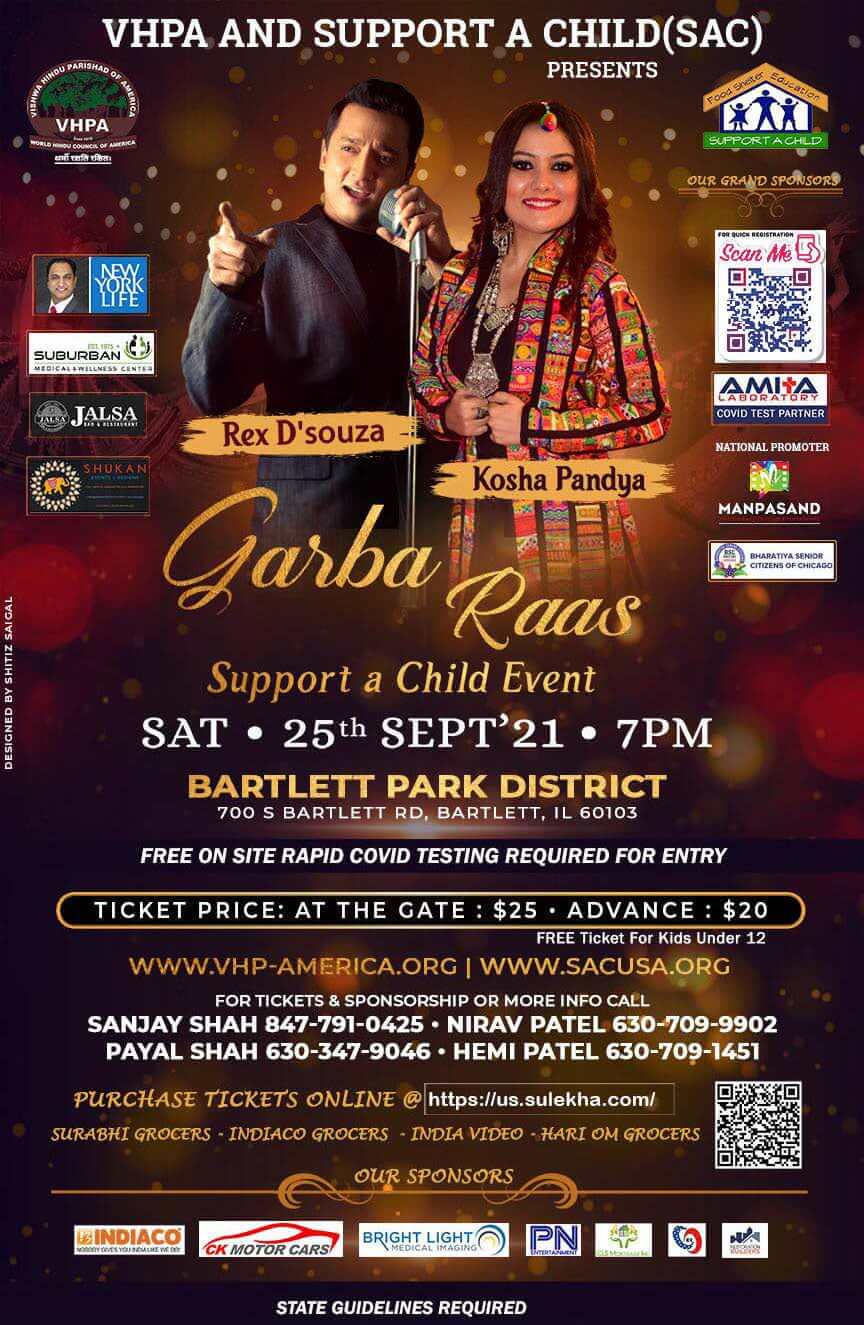 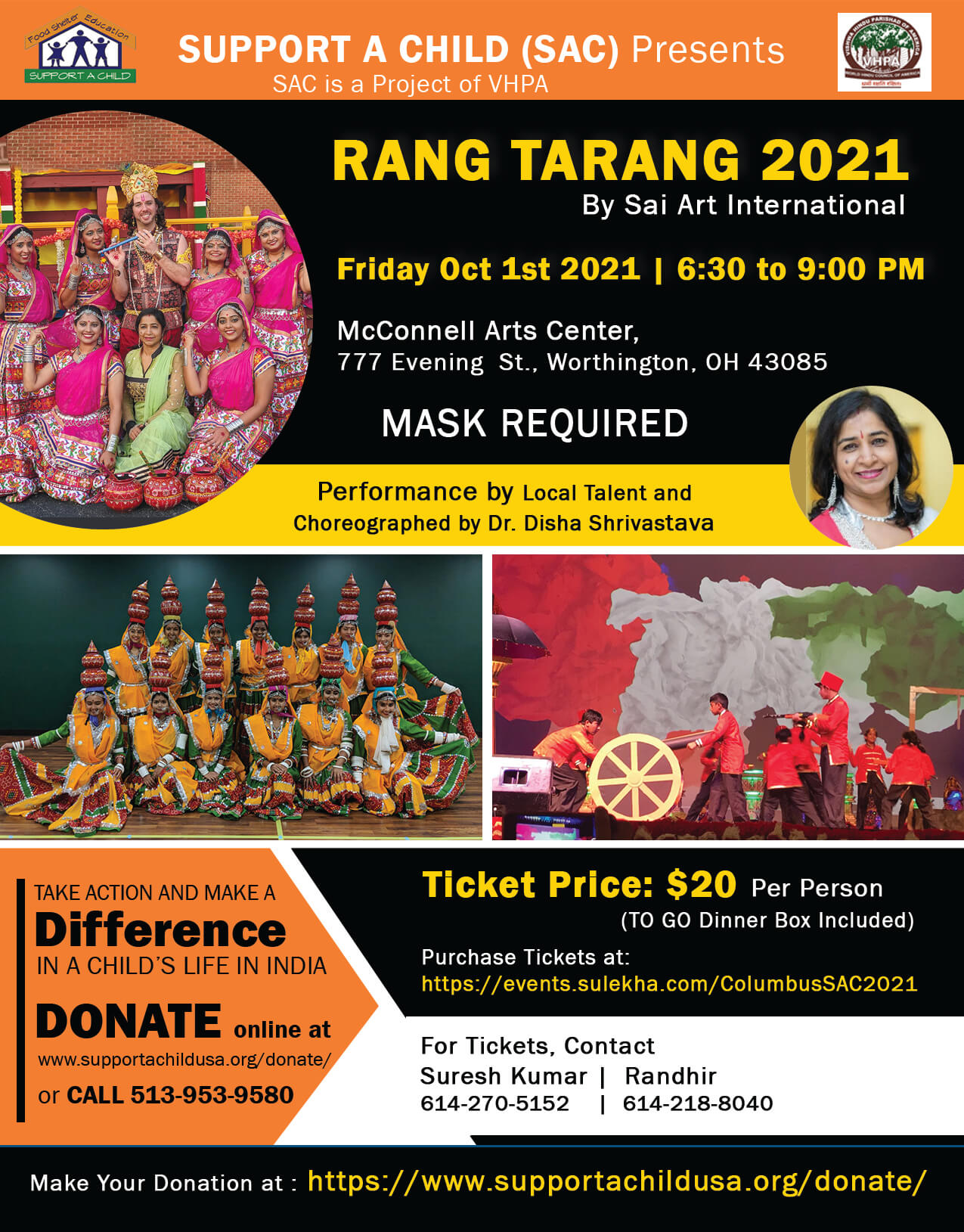 What is the difference between Pledge and Donate?

When you use the Donate button (Orange button at the top of every page), you have the opportunity to donate your desired amount using your credit card or bank account. You can select how many students you want to support, in which state(s), and may initiate a matching donation from your employer.

Pledge (Green button on this page) is your committment for a future donation. You put in your amount and contact details and our volunteers will reach you later to complete the donation process. Put simply, Pledge is an intent to Donate.

Is there a minimum amount to Pledge or Donate?

We appreciate any amount that you may want to provide to this noble cause. Please remember, it only costs you $250 per year to support one child.

How do I Pledge or Donate?

You can complete either process online. Please use the Orange button available on top of every page to Donate and the Green button on this page to pledge.

If you would rather complete either process over the phone, please visit our contact page and call us.

How can I watch the shows on my TV?

If you have a Smart TV and have the YouTube app on it, simply search for SupportAChildUSA and you would reach our channel. You can select the live show and enjoy.

If you do not have a smart TV, you need at least Chromecast or Airplay to cast the shows from your computer or cell phone to your TV. The folks over at Youtube have more detailed instructions that can help you.